We The Peoples
​ call for inclusive global governance ​ 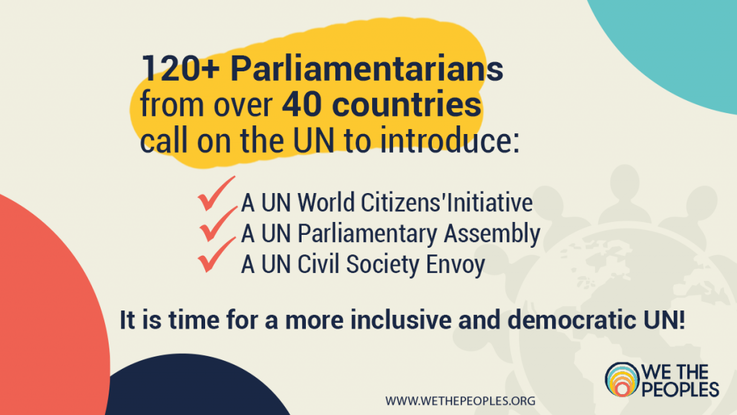 In a statement published on Wednesday, 26 January 2022, over 120 sitting parliamentarians from more than 40 countries and six continents call on the United Nations and its member governments to strengthen the world organization’s “democratic and participatory character.”

Thanks to the work of the One World Trust, 15 of these parliamentarians were from the UK, more than from any other country in the world. The full statement and press release can be found here.

In April 2021 an international civil society campaign for inclusive global governance was launched, spearheaded by Civicus, Democracy International, and Democracy Without Borders. Under the header “We the Peoples”, a reference to the first words of the United Nations Charter Preamble, the joint document is calling on the UN to implement three specific reforms aimed at giving people, elected representatives, and civil society a stronger voice and more influence.

The creation of a UN Parliamentary Assembly which allows for the inclusion of elected representatives in the agenda-setting and decision-making of the UN. The assembly will act as a representative body and watchdog connecting the people with the UN and reflecting a broad diversity of global viewpoints.

The creation of the instrument of a World Citizens’ Initiative which enables people to put forward proposals on key issues of global concern for discussion and further action at the highest political level. Any proposal that reaches a certain threshold of popular support should be put onto the agenda of the UN General Assembly or Security Council.